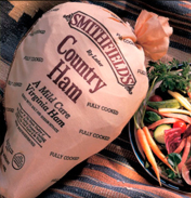 Geri reveals the other things you need to know that makes

​A Salt Solution
By Geri Zatcoff

Like saturated fat, salt, a.k.a., sodium chloride has been vilified as a culprit in negatively affecting a number of health issues, the most well-known being hypertension or high blood pressure. And like saturated fat, sodium is a critical nutrient that is essential for life and good health. It tastes good. We like it. We need it. But how much do we need and how much is too much?

An Essential Nutrient
Apart from adding flavor to food, salt is necessary for the survival of animal life. Sodium and chloride are the principle electrolytes in the fluid surrounding cells. Sodium maintains blood volume and blood pressure, facilitates contraction of muscles, conduction of nerve impulses and transportation of nutrients to cells. So important is the tight regulation of the body's sodium and chloride concentrations that multiple mechanisms work in concert to control them.

When it comes to food, salt and other forms or sodium are often used as preservatives.

Salt can be used to brine pickles or to cure meat or fish. Think Smithfield Ham and Salt

Cod. It is used as a binding agent, to enhance color or to give food a firmer texture. Some

sodium occurs naturally in most foods. However, up to 75 percent of the sodium that

Americans consume is derived from salt added during food processing or manufacturing,

rather than from salt added at the table or during cooking.

commercial cheese and breakfast cereals, or a significant amount of food outside of your  home, you needn’t worry about your sodium intake for the most part. On the other hand, if you are a regular at the drive through, have numerous restaurants on speed dial, often rely on take-out or pre-packaged meals that are microwave ready, it’s time to take a serious look at your sodium intake.

What is Sodium?
Salt is sodium chloride. The chemical formula for salt is NaCl with equal proportions of sodium and chloride. There are two sources of mass-produced salt: it is either mined from salt mines or rock salt deposits, or distilled from sea water or salt lakes. China is the world's main supplier of salt. In 2010, world production was estimated at 270 million tons with the top five producers being China, the United States, Germany, India and Canada. Salt is available in various forms including table salt, kosher salt, sea salt, Himalayan salt, rock salt and iodized salt. Salt can be unrefined like Celtic sea salt or highly refined and bleached like table salt. Some salt contains additives. More on that later.

Sodium and Disease
While hypertension is the most well-known disease association with sodium, excess sodium intake has been implicated in other diseases including gastric cancer, osteoporosis and kidney stones. While we know that chronic hypertension damages the heart, blood vessels, and kidneys, recent research indicates that high salt intake may contribute to organ damage in ways that are independent of its effects on blood pressure. For example, increased salt intake has been significantly correlated with left ventricular hypertrophy, an abnormal thickening of the heart.

How Much is Too Much?
Adequate intake (AI) levels of sodium as well as upper limits (UI) were established by the Food and Nutrition Board of the Institute for Medicine in 2004. The UI for sodium is 2.3 grams (2300mg) per day and 5.8 grams (5800mg) per day of salt. The American Heart Association recommends going even lower to less than 1.5 grams (1500mg) of sodium per day for certain groups. Both of these recommended levels are well below the average intake of most people in the U.S. with adult men coming in at 7.8 to 11.8 grams per and adult women at 5.8 to 7.8 grams per day. These figures do not include salt added to food at the table.

What Type of Salt is Best?
Whichever form salt comes in, its’ chemical composition is the same. The amount of salt that you consume is more important than the type. That said, minerals and trace elements are often found to be lacking in the diets of most Americans, so choosing an unrefined type of salt is a better option from a nutritional perspective. Let’s take a look at the options.

to describe foods such as grain, sugar and salt, the more refined it is, the more

hazardous it is to health. In addition to being stripped of magnesium, potassium

and other trace minerals, various additives such as aluminum (a heavy metal

out and to prevent clumping; and, stabilizers such as dextrose (a simple sugar most often made from corn) are common additives which affect color so bleaching agents are used to make it white.

​​​Sea Salt
Sea salt is unrefined salt produced through evaporation of ocean water or sea water from saltwater lakes, or collected in man-made pools near protected shorelines and is minimally processed. Table salt is typically mined from underground salt deposits by industrial processes that strip most of the minerals present in it. The major difference between sea salt and table salt is in their mineral composition.

Depending on the water source, sea salt contains important trace minerals and elements. These naturally occurring minerals add flavor and color. Because table salt is stripped of most of its’ minerals during the extraction process, it contains 99.9 percent sodium chloride as compared to sea salt, which contains only 98 percent sodium chloride. What makes up the remaining 2 percent? Not only trace minerals but upwards of 80 important minerals including iron, sulfur, and magnesium. Its’ trace mineral content is what gives sea salt more flavor and less “saltiness” than  its more refined counterpart.

area. It can be derived from both sea water and salt mines. Typically found

to be less “salty” than table salt, kosher salt has a mild but bright flavor and

is usually free of additives (but not always). Both of those properties make it

a better option than table salt.

Himalayan Mountains. Mined in both Tibet and Pakistan, the salt crystals

formed from salt water that was once a sea in the area. Historical  records

show that people have been extracting salt from these underground deposits

since 320 BC. This salt is known for color and flavor. While this salt is most often found as “pink”, crystals can also be red, off-white or transparent.

Because of its age (estimated at 250 million years) and method of extraction (by hand), Himalayan salt is completely devoid of toxins or pollutants. The texture of Himalayan salt and its mineral taste are more noticeable when kosher salt sized crystals are used.  Upscale restaurants use small blocks or slabs for broiling and grilling foods. The salt flavor is infused during the cooking process by keeping the food in contact with the surface of the salt slab.

Rock Salt
Rock salt is the mineral form of sodium chloride. Also known as “halite”, it is used industrially in a wide variety of manufacturing applications. At home, rock salt is used for making homemade ice cream, pickling and curing, and for making “salt” crusts for meat or fish. A word to the wise for cooks using rock salt: be sure to purchase food-grade rock salt. Sold in both grocery and hardware stores, it is most often used to melt ice on roads, driveways and walkways. Rock salt used for this purpose may be treated with chemicals.

Sea Salt….A Better Option
The quality of sea salt varies tremendously. If it’s white like table salt it may have been bleached. Good quality sea salt contains microscopic amounts of sea life, which provides natural iodine. It will be gray in color and even slightly moist. While sea salt contains minerals which add flavor and color, by weight, sea salt and table salt contain the same amount of sodium. However, because of its’ stronger flavor, you needn’t use as much.

Good sea salt comes in a variety of coarseness levels, some of which require a salt grinder. Salt grinders differ from pepper mills in that the blades of salt grinders are ceramic rather than steel to resist salt’s naturally corrosive properties. Dry out the salt gently before grinding.

Light grey in color, Celtic sea salt is dried only by the summer wind and sun. Also called “grey”

salt,  this salt is famous in the culinary world and is considered by many to be the best quality salt available. While best used in cooking, it is utterly sublime when lightly sprinkled on grilled or roasted meats, fish and vegetables. It adds tremendous flavor and a bit of crunch. If you prefer it finely ground, be sure to use a ceramic grinder and only grind as much as you need. To keep it from clumping, add a few grains of rice.

The Bottom Line
The easiest way to reduce sodium intake is to eat less processed foods. Cook and eat more meals at home. Salt is an acquired taste. A little salt in cooking goes a long way. Adding a touch of salt during the cooking process typically means less salt at the table. Spices and fresh herbs enhance the flavor of food as does a squeeze of fresh lemon juice.  Properly seasoned food shouldn’t need additional salt added at the table.

The bottom line is this: if you don’t have a medical condition that is exacerbated by the use of salt, there is no reason to restrict it in your diet. Unless of course, you are eating packaged, processed and fast food on a regular basis. However, if you’re a regular subscriber to this magazine, then you love good food and enjoy cooking at home. You will never regret splurging on some really good quality sea salt. Enjoy! 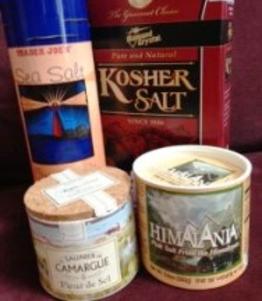 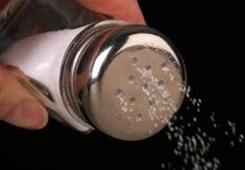